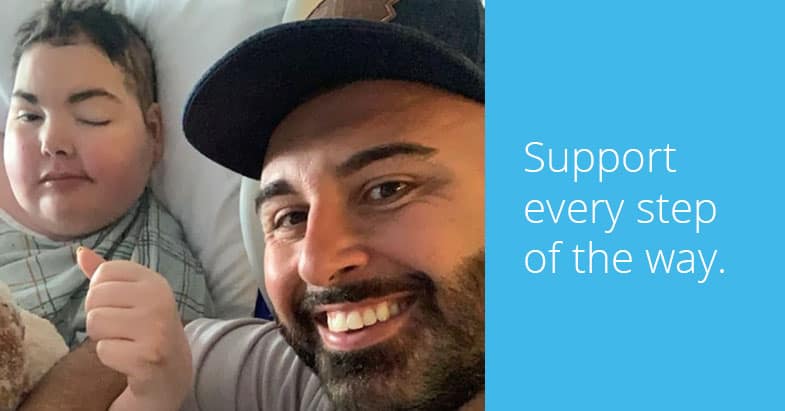 Extraordinary Care Every Step of The Way

This is Gianna and Anthony’s Story

Though Anthony was nearly two decades older than his little sister, Gianna, the two of them were inseparable from the start. Anthony even shared his love of the New York Knicks with Gianna, bringing her to her first basketball game at Madison Square Garden when she was just 4 years old.

Anthony was his sister’s primary caregiver, and when Gianna was diagnosed with cancer at 10 years old, they struggled with navigating her treatments. After spending the next decade in and out of hospitals, Anthony was overwhelmed and knew it was time for help. That’s when they turned to  us.

Support Every Step Of The Way

When Anthony called their hospice pediatric nurse because Gianna was in intense pain and needed immediate help, the nurse dropped everything and drove across the city to be there. Their pediatric social worker was always there to support them during the emotional roller coaster. Gianna would talk with them about her dreams of becoming a chef, and they would spend time making Pinterest boards about cooking, knowing that everyone still has big dreams in their heart.

From the moment that Gianna passed, a bereavement counselor has been there with Anthony to provide support as he grieves the great loss of his little sister.

Anthony recently organized a night at the Knicks for his MJHS care team, and it was an emotional reunion for everyone. The New York Knicks hosted and honored their pediatric nurse, social worker, and bereavement counselor for the care they provided to Anthony and Gianna, and so many more families during the pandemic.

Because of your generous donations, we are able to provide extraordinary care that makes such a difference to families like Anthony and Gianna. Your help ensures that patients of all ages receive the compassionate care that they need and that MJHS Hospice can always be by their side for support. Even though the spring holidays may be a bit different this year, it is still important to find ways to connect with our loved ones. And thanks to generous donations, our team at Menorah was able to make it extra special. Learn More.

Our summer plans may have changed because of the pandemic. But at MJHS, what hasn’t changed is our commitment to providing engaging therapeutic activities for our Menorah Center residents.

Building Memories at the End of Life

Inspired by Nature, Supported by You